So after we left Siem Reap we took a 12hr bus to Bangkok where we got street food in the city and immediately headed to the airport to meet up with our friends Charlie and Emily. They being absolutely insane decided to come out and visit us on their one week of vacation from work. Yeah they flew travelled 30hrs each direction for 6 days in Thailand. Baller. We flew down to Krabi with them and hung for a bit. We spent a day over in Railay Beach, which is infamously known for the huge limestone cliffs and white sand beach of and the long tail boats you have to take to get there

Next we headed over to the Island of Ko Phi Phi (pronounced pee pee). Man what a party island. There are bars every two feet and everywhere has fire dancers at night. It was a great place to hang with friends for a few days and when we were bored of partying we just hung out on the deck of our room and played cards with bottles of Hong Thong (Thai Rum) to keep us company.

After their time in Thailand came to an end Athena and I were very ready to get off Ko Phi Phi and find somewhere less “touristic” as the rest of the world calls it. We ended up stumbling onto an article about the islands of Ko Yao. Broken into two islands, Ko Yoa Yai in the south and Ko Yoa Noi in the north, these two islands are one of the last places not overly populated by vacation goers in the Thai islands. Both Islands have a very large Muslim community who has actively tried to keep the party tourism out. What this means is there are these two beautiful, quiet, huge islands perfect for love birds and those trying to escape the drinking and crowds….perfect for us. We had no plans and just decided to take a boat to Ko Yao Yai and figure it out as we went. We ended up staying at this beautiful private bamboo bungalow right next to the beach. So we stayed for a while. The Island is 46km long so being able to ride a scooter is imperative. Everyday we’d wake up, hop on our ride and find a new random secluded white sand beach, which might have you and at most two other people there. From the island you look out on the surrounding limestone islands that jut up out of the Andaman Sea. It’s like a prettier quieter version of Phuket. I think its Thailands best kept secret. That being said, its not the best place to go swimming. At low tide the beach stretches out some 200m from shore meaning you have to go a ways out to ever get more than ankle deep. 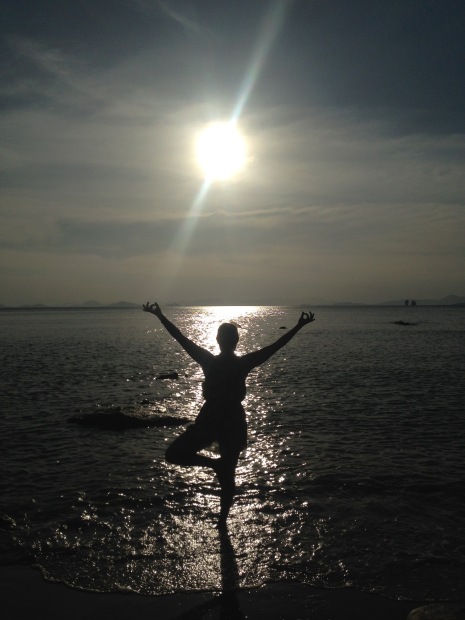 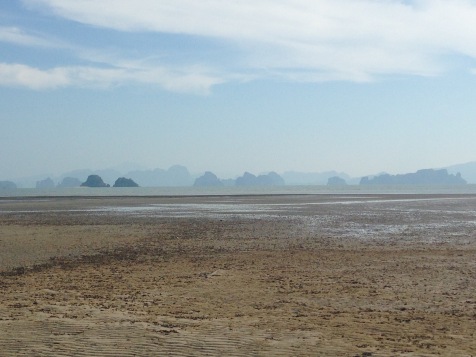 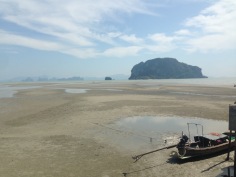 After Ko Yao Yai we took a little long tail over to Ko Yao Noi where we stayed for another week. There’s so much to explore all over the island. I was having a blast riding down dirt roads on my little scooter, now knowing what they could take after seeing so many people in CRAZY places in Cambodia. We took a boat trip out to the surrounding islands with this awesome German couple. We snorkeled all over the place and climbed up a tiny island and got a great view looking down on the incredible blue water. 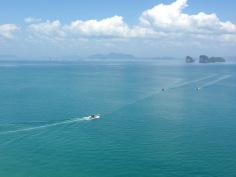 We stumbled on this really cool resort called Jai Yen Coworking Retreat. It was still technically being built so they gave us an incredible discount on a room and holly hell was it beautiful. The owner was a super cool guy who was working to design these eco-conscious productive-vacation spots for creative types to come and work. It was supposed to be $500/night we paid $40. 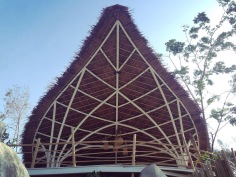 After countless days of beautiful white sand beaches and nights with one spectacular sunset after the next we eventually moved on to the other side of the Thai Peninsula.

After a nice long ferry to a bus to another ferry we made it over to Ko Phangan. This weird Island is a combination of party goers and hippies. The southern half of the island is the club night life scene, most popularly known for “the full moon party” where some 40,000 people show up once a month to get trashed on a beach. Athena and I decided to stay on the north west side instead. Over here you will find countless vegan and veggie restaurants, juice stands galore and nice beaches with families on vacation. No longer do you have the beach to yourself…anywhere. for the first day both Athena and I were like “why did we ever leave the Ko Yao’s”. But Phangan is pretty cool. There are waterfalls and nudie beaches. Incredible places to snorkel and that crystal clear blue water that Thailand is known for.

There is also a huge network of dirt roads that run all over the island….and dirt bikes to rent. So I got myself a Honda crf250L for $15/day and went exploring. Getting down to the beaches you’d otherwise have to pay a boat to get to was super cool. I ended up finding a little hotel out on a beach away from everything else so the next day Athena and I moved over there for a few days.

It’s a pretty cool island for sure and I can see how people end up getting stuck there much like the Pai hole. Everything is easy and beautiful and there’s a little bit of something for everyone.

We then continued up the Chumphon Archipelago to Ko Tao. Famous for its diving, Ko Tao has over 500 certified dive operators on the island, and a ton more who aren’t certified. It’s the cheapest place in the world to get a dive certification and knowing that we wanted to dive the Great Barrier Reef in Australia, Athena decided to conquer a massive fear of the ocean and finish out her dive certification. It was awesome. We found a well rated shop and they ended up doing a one on one class for her with a certification, two dives for her, and two dives for me for about $250. Crazy cheap. So we dove and ate and around the island and did a bit of exploration, but by now our free 30 day thai visa was starting to run out and we still wanted to make it to Khao Sok National Park back on the peninsula. So after a few days diving and Ko Toa-ing we headed back on one of the roughest early morning ferries I’ve ever been on to the main land.

Southern Thailand is seriously vacationland, everything is cheap, easy, beautiful, and you can find a little bit of anything from partying to hanging out naked (stay away from the cops) on a beach. Pretty much just long tail boats and perfect sunsets. 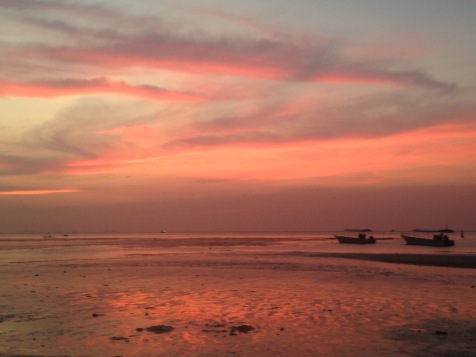