UPDATE: If you’ve been following along or happen to get an email when I put up a new one of these get ready. Its been a long bit since I posted and it turned out that I was having too much fun traveling to stop and figure out photo uploads and all that jazz. But I do have a bunch written from the last 4 months of travel. So here are a bunch of the stories of our travels. Currently most are without photos, because that take way too long, but I hope to update them to full products later. enjoy reading!

I’ve missed a spectacular post about our awesome New Years adventure on the island of Koh Rong Samloem, but hopefuly that’ll be written soon and up to read. Until the here is a little story of probably my favorite place in all of Cambodia.

We started our day early in Kampong Cham. We woke up at 6:15 and rolled over to see the sunrise over the Mekong from our bed. A great reminder why starting the day early is so nice. We had seen the sights and booked a bus out of town so we got our things and headed downstairs where a tuk tuk was waiting to take us to the bus station. Luckily there was only one bus leaving then, because there was very little communication from the station about what bus to get on or when it was actually leaving. I thought we were going to have to go all the way back down into Phnom Pen, but to my surprise the bus took the northern route and in a quick 3.5hrs we were arriving in Kampong Chhnang. This however was not the buses last stop. And good thing I was checking my location on my phone because it ended up not being a stop at all. I waited as we went through the center of town and as we were leaving and after I realized there was no plan to stop, I went up to the front and the bus driver happily pulled off and let us off. Close one.

We walked into town and got lunch. After lunch we were approached by a tuk tuk driver as always who offered to give us a free ride to Garden Guesthouse, the place we were already planning on going, but we said no and chose to walk the 15ish minutes assuming as always it’s some other ploy to get $$. We got there and who’s hanging out but our favorite tuk tuk driver. We got a nice cheap private room and now being almost 1, figured we should head out to see the sights. Our tuk tuk man offered to drive us to the pier to see the floating villages for $2 there and back. Not bad so we got in.

When we got there we bargained with a woman who ended up taking us out on her small lawnmower powered boat about 30 minutes up river where we meandered through a series of floating villages. I had heard this was the “thing to do here” and that while Siem Real also has floating villages these are much lest touristy and more real life. And real life is true. Out on these floating raft homes are families hanging out together, kids playing in the water, and ice cream/beer boats that troll up and down the rows. Everyone has dish TV, begging the question, where do they get power? Some had solar panels but definitely not all of them. As we were cruising through the rows of houses Athena turned to me and said “we’ll this is not exactly what I had seen coming from my day but it sure is beautiful”. It was a very interesting, very different slice of life that was quite something to see and a great reminder that all while there’s people watching Sunday football, others are living this drastically different life. 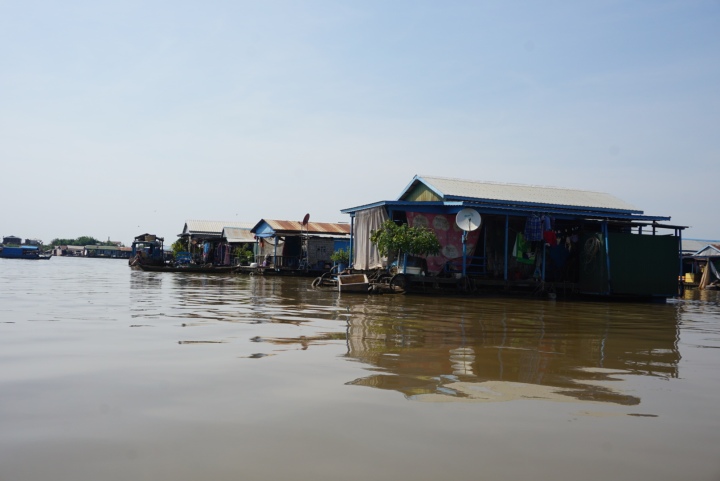 We got back to the dock after our boat trip around 2:45 and not wanting to head right back we asked our friendly tuk tuk driver if there was something else in the area we could do. He said for $15 he could take us on a whole tour loop around the country side, so with nothing else to do we finally took our first tuk tuk tour. We stopped at the one mountain as far as the eye can see and hiked to the top. Mountain is a very exaggerated term but comparatively there was some elevation…..Cambodia is FLAT!!

After that we stopped at “the stone bakery” aka a brick “factory”. Our second third world factory in two days. (A rubber factory in Kampong Cham being the other, check the Vlog for proof). Our driver got out and explained the whole process. Next we went to a pottery factory were they make clay oven/cookers that are used all over Cambodia. Here we learned that town gets its name from its two most famous features. Kampong means river, and Chhanang means pottery. The clay from the “mountain” we had just climbed is used by the surrounding village to make all manner of clay items from cookers to piggybacks. We stopped in one “the pottery village” and got to go house to house seeing how each family made their own pottery item and fired them in kilns made in their back yards. The pottery at many of these places is nothing like you’ve seen. No throwing wheels, bust a smooth rock and a bamboo swatch to slap the bowls into shape. There was one stop in the village that had a foot powered throwing wheel where Athena and I got to try our hands at a little vase making. For the second time today Athena looked at me and said “well this is really not what I was expecting out of my day this morning”. With a good laugh and the help of the woman who worked there we were able to make a half decent product….mine was better.

While we were in the village we also got to try some palm sugar, the other main piece of the local economy. Palm men climb 40-50 palm trees twice a day to harvest the water out of the palm flowers which is then either boiled down to make palm sugar or fermented into palm wine. It was delicious. And makes sense when you see how many palm trees litter the utterly flat landscape.

After our village visit we were taken through the rice fields out to our drivers favorite sunset view point. It was now 5 and the sun was low in the sky. So we stopped and took some photos and talked while the sun we had seen rise over the Mekong not set over the clay mountains of Chhnang. While we were stopped we chatted with our driver (who’s name we never got and I’m kicking myself about it) about Cambodia. He’d lived in Chhnang his whole life and talked about the development in the cities by the Chinese and his dislike of the government, which had been set up by the Vietnamese after the genocidal Pol Pot Khmer Rouge fell. He talked about how Cambodia had given so much to the Vietnamese in both land and cheap exports the Cambodian people needed. And how the government, which has been the same for the last 40 years hasn’t done anything to change or help and refuses to let elections happen. He quickly became quite as another motorbike rolled past suggesting the current government was only slightly better than Pol Pot and you can still get in a fair bit of trouble for saying anything against the government. He talked about the millions of people who have left to work in Thailand and Vietnam instead of Cambodia due to the lack of trust in government and low  opportunity for work. It was a very real life conversation, and one which I’ve had in more than one country we’ve been in so far. On the ride back into town Athena and I both looked back on our unplanned unexpected day in Kampong Chhnang and how this little slice of real life in a small Cambodian town was so refreshing after hitting the main tourist spots and had been by far our favorite place in the country so far. Sure even though we were doing the touristy things here it felt like a nice break going a whole day sunrise to sunset without seeing another westerner. Having hit the sights, tomorrow we’ll catch a bus up to Battambang, but for now thank you “River pottery”.