Hoi An sits about 35km south of the much larger city of Da Nang. It’s an ancient fishing village that in the late 2000’s was named a UNESCO world heritage sight. At the time it was known for its small streets, and classic and well preserved architecture. Now however, much like the Hi Van pass, it’s infamy as the local home of Jeremey, James, and Richards extravagant tailored suits the vibe of the city has changed drastically. The small fishing town, which was indeed home to some world class tailors, is not a bustling tourist destination, in which many of the old architecture building have been taken over by either new tailoring businesses or chachki trinket shops aggressively “catering” to the tourist crowd.

When we got there right after there had been some some major flooding which meant the typically picturesque beaches were a bit thrashed. We stayed at a hostel called the lazy bear and got the nicest private room of the whole trip for a smooth $16USD.

If you know me personally or have been following along a while you’ll know Athena and I are getting married next September, and being in a city known for some of the nicest cheapest bespoke clothing in the world (next to Hong Kong and parts of South Korea) of course I was going to get my wedding suit made here. So we did a bit of research because while there are many tailors, and while many use the same materials, not all are created equal. The first day real in town we went walking and along the way saw a suit that we both really liked. We stopped in and before we knew it we were picking out colors and ties and linings and had done the whole process and right as she was giving us the price I remembered all that research I had done and went outside and googled the name of the place. It was #436 of 450 tailors in Hoi An. All the reviews were absolutely terrible! I’m so glad I remembered to do that just before paying the deposit. I slyly showed Athena and politely excused ourselves to “get cash for the deposit”. The woman knew I had seen the reviews and was immediately super hostile about how I needed to buy from her and Athena should wait while I went to go get the money. We said we’d think about it and got out as fast as possible. After that and bad-taste experience and looking around a bit more we just decided to go to the well known, definitely a little pricier tailor, Bebe. Sure I could have found somewhere cheaper but for my wedding suit I wanted it to be nice and the costly $200 for a custom suit and shirt was nothing compared to what it would have cost back home. The shear amount of options from liners to piping to cut and style to materials was truly overwhelming to an ignorant fashion novice like myself. But it was still fun. And the craziest part is that we walked out of the shop at about 11:30am having made all the aforementioned selections, and by 5pm that evening a fully custom suit was ready for the first fitting.

Me and my lovely tailor assistant

Aside from tailors and trinkets Hoi An also has some fantastic Banh Mi. If you are unfamiliar, you should change that since these Vietnamese sandwiches are the perfect combination of eastern and western cuisine.  French baguette bread, cucumbers, tomatoes, Vietnamese cabbage slaw, chili paste, and your choice of delectable fillings make a mouthwatering explosion of flavor. Anthony Bordain named Banh Mi Phuong, located in central Hoi An his “best Banh Mi in the world” making it a massive success which has a line out the door at all hours. But in our Banh Mi excursions Athena and I found Phi Banh Mi, a very small shop built in the front living room of a families house.  At Phi Banh Mi they make cheaper and arguably better variations on the Banh Mi classic. Athenas deep love for bread and their unbeatable price at 15-20k dong ($0.50-$0.75) each meant we ate a lot of Banh Mi in Hoi An, but I ain’t complaining.

On our second day we went for another fitting of my suit and a secret mystery garment Athena had made (not her wedding dress). Trying it on again the fit was spectacular, but being the prince that I am I just wasn’t in love with the color. I had wanted a reddish/purple color for something a bit different and to look nice in the forest theme wedding. And while it was quite something the suit was best described as “aubergine” or for the Americans playing along “eggplant”. I asked the salesperson to see the swatches for suit colors again and if there was something a bit redder, and first thing she brought out, which I swear they hadn’t before, I flipped open and there it was, the perfect color. I talked to them and being remarkably accommodating they said since they had already made the first suit they’d only charge me for the cost of materials for the second one. And that’s how I now have two extravagantly colored bespoke suits made in Vietnam. Since they already had the measurements off the first suit, the second one was done in record time and both were ready and gorgeous by the morning of the next day. Inbetween our tailor appointments and Banh Mi eating, we mostly walked around the old town and it was both beautiful and sad to imagine what this place must have looked like only 10 years ago before the tourist trade.

Which brings me to a huge side note:

So far on this trip most long term SEA travelers we talk to have mentioned their favorite country to visit was Myanmar. The very recent opening of the boarders mean it’s in ways the “final frontier” of backpacking SEA. In that it hasn’t yet been hit by the huge commercializations of tourism. That being said you still can only travel to certain areas and I think all travel is still heavily controlled by the government. Anyways while all of this sounds like we should definitely go there is the manner of the ethical question. By traveling to Myanmar, even if you try to stay locally the whole time, you’re still directly financing a government which is currently participating in ethnic cleansing. So what do you think? Is it worth a little ethical compromise to see a spectacular part of the world before it’s “tourized”?

Anyways back to Hoi An. By this point Athena and I were both just so incredibly done with the riding in the rain and it didn’t look like it was going to really stop anytime soon so we opted out. We found a motorbike shop in Hoi An and ended up selling the bikes and taking a decent, but not terrible hit on them. The next bit of sun was 16 hours south in Dalat and it would have cost about 1.5million dong ($75USD) to put them on a bus down there and after the problems with Don-key there really was no guarantee we’d be able to make any more on them once we made it to Ho Chi Minh. So alas, the motorbike portion of the Vietnam trip came to a rather depressing end. But Vietnam, you can’t get me down. I’ll be back to conquer your glorious roads someday.

After selling the motorbikes we rented regular old pedal bikes to take a little tour of the country side surrounding Hoi An. In comical fashion the day after we sold our bikes…it stopped raining. Oh well. The countryside ride was beautiful. Through vegetable gardens, palm groves, small villages and this one dude chillin on a buffalo. 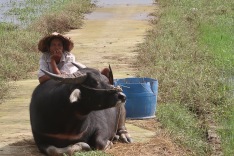 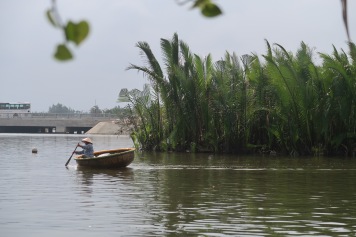 After collecting our wares from the tailor and sending them 3 month seamail home, with a variable 50/50 they actually get there, we decided to head out of Hoi An and got a night bus 16 hours south the the mountain town of Dalat. As was true with every bus we have gotten on in the country, it was late. So I passed the time playing with a new puppy friend I made at the bus stop.