With the aid of some over the counter “sleeping aids”, the 16 hour bus ride really wasn’t that bad. At 5′ 9″ (175cm) I’ve never had an issue with my height, but I can say traveling Asia has been the first time that I’ve ever been genuinely thankful for it. I can just barely fit with my legs stretched out, with my feet turned a bit, into the sleeper bus beds. I can’t imagine how all the 6′ Scandinavians do it. Oh fun fact, when we got on the bus in Hoi and half the seats were packed with cargo boxes because, hey why not. Anyway after a quick movie and a nice nap I woke up to blaring sunshine, and I couldn’t have been happier. We were 5 minutes out of the Dalat bus station and at some point all of the boxes had been unloaded, and I had been none the wiser. Getting in at 7:30 am we were keen to stretch our legs, so we decided to walk the 30ish minutes to a hostel that had been recommended to us by the Dutch guys in Phong Nha called the Cozy Nook. The weather was perfect and the air up in Dalat is a bit crisper than the rest of southern Vietnam. Immediately along the walk you can tell this place is in Vietnam, but very different than everywhere else. Being up in the mountains and having a cooler climate it was a retreat for many of the French people during their occupation of Vietnam and their style never really left.

Like a Vietnamese Luang Prabang the architecture is semi-French influenced and the predominant color is white as opposed to the typical orange yellow of the rest of the country. Sitting in the center of the town is a lake that was initially the accidental product of poor dam management, but now acts as a centerpiece and main landmark in this mountain town.

We made it to the Cozy Nook and dropped off our bags, but being too early to check in we got a run down from the owners, grabbed our day bags, and headed out explore. The first stop on our list, which was just around the corner from the hostel, was a place called Crazy House. Rated in the top ten worldwide architecturally wild houses, it really is crazy. Its almost like A Doctor Sues book came to life with a little of Alice in Wonderland sprinkled on top. All concrete the scale and spread of the structure is remarkable and they’re still building! For the insane cost of $50-100USD/night you can stay in one of the hotel rooms built into the house and wander the grounds without the tourists at night.

I just realized that in writing these posts I invariably start talking a lot about architecture and I fully blame my parents. If you don’t know me my parents are architects and interior designers, so from the time I could sit in a car seat weekends were spent “house watching” and now it’s become engraved in my being to notice it where ever I go.

Alas, crazy house was crazy and yet again the pictures explain way better than words. 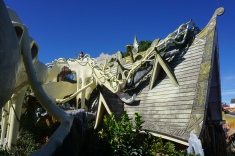 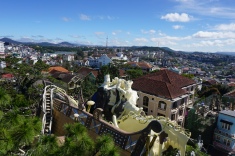 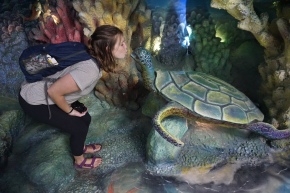 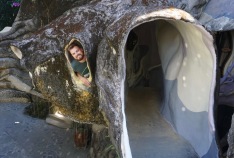 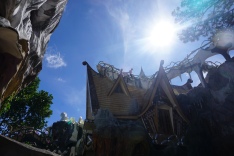 After our crazy time we walked over to the lake and saw they had swan paddle boats that you could rent out. Since it was finally sunny and the lake looked beautiful we splurged the $2 and had a lovely time seeing the town from the water. The rest of the day we walked around and found flower gardens and little parks. It was so pleasant. 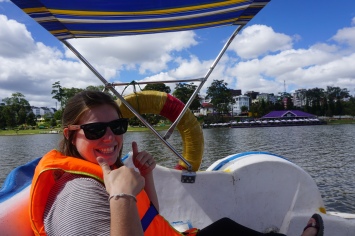 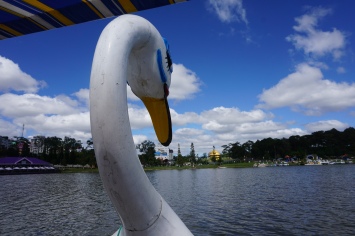 We headed back to the Cozy Nook and hung out with some other travelers there before the family dinner at 6pm, which was delicious, copious, and inexpensive. The traveler trifecta. There must have been at least 25 people crammed around little tables and having a great time.  And of those 25 at least 7 or 8 were Dutch. Turns out there are an insane amount of Dutch people who travel to Vietnam and there are about 3 Dutch Facebook groups for travelers, all of which rave about the Cosy Nook. I think there was only 1 time in the three nights we spent there that there wasn’t a minimum of 1 Dutch person in the common room. That being said, its recommended for good reason. The people who run the hostel are SOOOO nice, it’s incredibly clean, the beds are soft, it’s not too big and generally is just a cozy place. 10/10 recommend the Cozy Nook if you go to Dalat.

One of the big attractions in Dalat is it’s canyoning trips. And after reading about them in a couple of places including an adrenaline seekers list of SEA, we decided to splurge a little and enjoy the sun. So the next day we woke up and the two of us and 5 other people from the hostel headed to Dalat canyon for the big adventure. Not entirely sure what to expect, it was a pretty fun experience involving a lot of abseiling (rappelling) down waterfalls, cliff jumping, trekking, and lots of Bahn Mi for lunch (no complaints here). The best part is you get to do the whole thing in a body condom wetsuit and helmet to make you look extra cool. While it was lots of fun and I’m glad I did it, I don’t know if I’d really call it an adrenaline intensive activity. But maybe I’m just used to rope work from climbing and adrenaline from all my other hobbies. 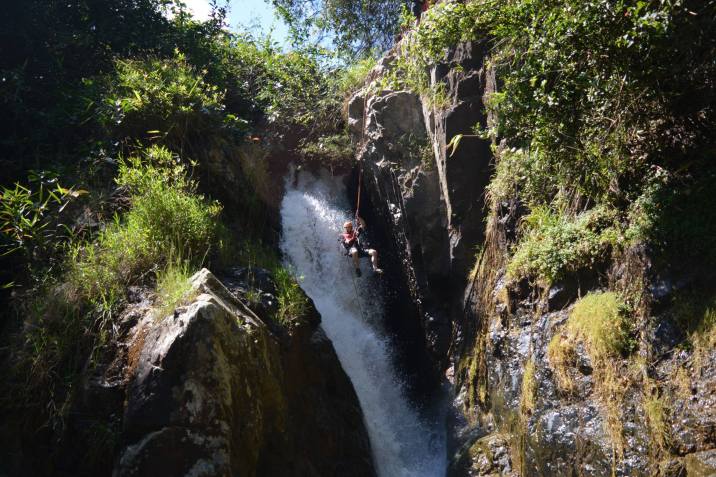 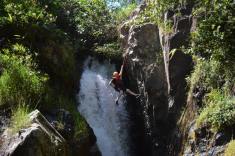 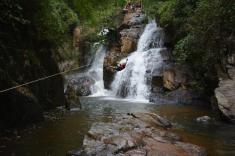 We got back that evening and we’re tired so we opted for family dinner again and with a whole new menu it was still delicious. And there were about half as many people. Included in our trip was a drink from the Nooks bar at dinner and their passion fruit “vodka drink” (a local special) was dank! After dinner they had a nice candle lit aperitif for everyone. We started chatting with a New Zealander named Janine from Christchurch. She’d recently finished her studies as a scarfie at University of Otago and after sharing stories we realized we had overlapped when I had been studying there. After a long evening of chillin at the nook drinking beers and talking with other folk we headed to bed and made a plan to rent motorbikes with Janine the next day to drive out to the countryside and find some waterfalls.

The next day we woke up to another amazing breakfast and went into town to find some scooters to rent and right by the central lake we found a couple of places. We headed out of town and dodged a couple of “yellow jackets” or traffic police who tried to stop us on the way out. About 45 minutes out, we stopped out Elephant falls. 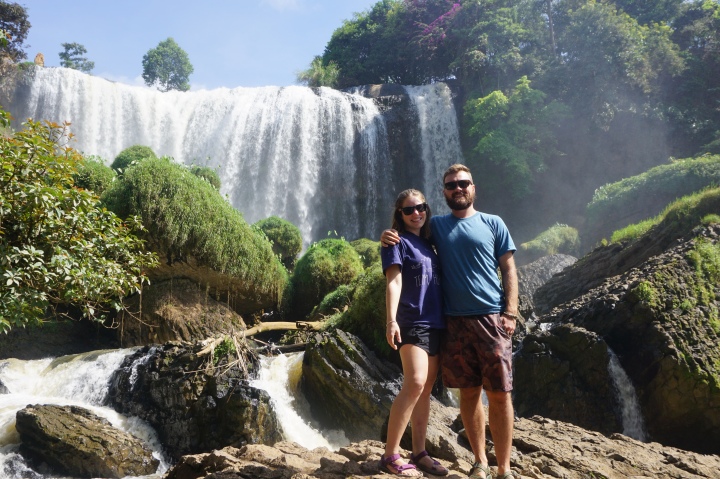 And while it looks nothing like an elephant it was pretty awesome. But we’d heard about an even cooler waterfall another 45-60 minutes. So back on the bikes and the first 3/4 of the drive was fine but then it suddenly switched to the mostly rutted dirt and gravel road, which I was having a blast on, while Janine plugged her way through behind (first time on a scooter in Vietnam). And Thac Pongour, the farther falls, is just breathtaking. Payed our 20k dong entrance and got to hang out down at the base on this really cool basalt flow. It looked like it could have been in a national park back in the US. 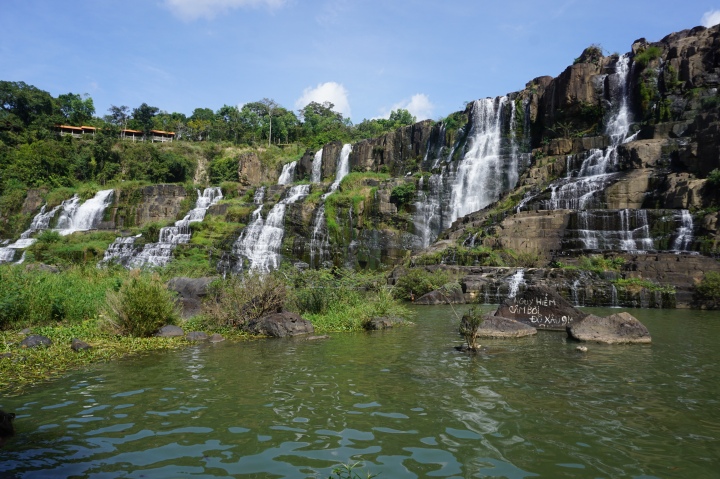 All now starving, on the drive back we stopped at a place in one of the little towns to get some food. Janine said “how are you” in Vietnamese, which they took to mean she was fluent and proceeded a long confused conversations on all sides, which eventually lead to them just bringing us some food. Hot pot style cook your own Pho with all manner of interesting things in it. Random meat bits and blood sausage and other questionable part of things made it an interesting experience. But hey it’s a local delicacy and that’s what travel is about isn’t it.

Along the way back near town we stopped at a cafe that had a view of the valley before and tried a Dalat special, weasel coffee. The coffee beans are eaten whole by weasels whose digestive system does something and then they poop out the while bean and it’s ground into coffee. It taste pretty much like regular coffee to be honest, but now I can say I’ve drank coffee that came out of a weasels butt.

After the last two nights being so great we did family dinner again at the Nook and afterward went to go explore the “maze bar” with some friends. Maze bar is a building in the center of town built by the same architect who designed crazy house. But unlike crazy houses extravagant outdoor stairways it’s a tight 7 “story” indoor maze with hidden levels and doors you can open and genuinely get lost in for about an hour. All for the entry price of one 30k beer. All the way at the top there’s a little garden that looks out over the city and has a quite fabulous view.

After a bit of talking and a few drinks we head back to the hostel and hung out in the common area just chatting and having few casuals. Which is much more my speed than the crazy oomst oomst of a party hostel.

The next morning after three good days in the sun in Dalat we decided to head south and catch some beach time in Mui Ne while the sun was still around.